An Argument In Favor of PC

If you're anything like me, you are sitting at work on Thursday, June 30, at roughly 2:30 PM contemplating what sort of over-the-top, big-ass, red-meat, red-hot-BBQ, ice-cold-beer, 'Merican, eat-yourself-silly sort of feast you are going to whoop up to celebrate the Fourth of Juuuuuuuly. I know I am. Unfortunately, I haven't decided just yet. However, I know one thing that I am going to have on hand for certain: Pimento Cheese, a/k/a PC.

If you're a died-in-the-wool citizen of fly-over country, like me, your only exposure to Pimento Cheese was likely the kind made by Kraft that came in the little glass container that later became a juice glass. No one I know actually bought the stuff, opting instead for regular old Cheez Whiz, or maybe Old English on a very special occasion. (And of course, most of it was used to stuff celery.) Anything that had red pepper looking things in it was obviously considered entirely too 'picy by our Norwegian forefathers and foremothers. And as far as pimentos went, those were the things in the olives. So, PC remained a mystery.

Well, I'm here to tell you that this stuff can change your life. And, as a bonus, it's easier than hell to make. There is really no reason not to have some on hand.


You can also increase the heat level to a delightful warmish by cutting the cheddar back to roughly 8 ounces and then using about 2 ounces of pepper jack. Finely dice a fresh jalapeno and put that in there, too. Everything else stays the same.

What is this stuff good for? Everything. No kidding, everything. Here are a few ideas:

Interesting News- New Chain Bar and Grille Coming as The District Gets a Rookies Infusion. How much Grill can we take?

I have to hand it to Jodi Schwan at the Argus Leader for rooting up interesting business news that includes new restaurants. Check out Jodi's story here.

The gist of the situation is that a new restaurant, Tanner's Bar & Grill, a chain from Kansas and not to be confused with Tinner's is coming to Sioux Falls and will land in the space currently occupied by Rookies Bar and Grill on Louise Avenue. Rookies is going to relocate to The District, apparently where the lounge is and the Woodfire Grill at The District is also apparently going to go through some sort of re-birth.

Admittedly, I am a little confused, which is probably par for the course. I'm not clear whether Rookies will be sort of separate from Woodfire Grill, or whether we are talking about some amalgam of the two. I guess we'll find out.

This whole situation is rather interesting to me, though, for the following reasons:


Good thing it's summer. Perhaps I can just stop by the bar for a beer and skip the grill in favor of going home where I can fire up my own grill and grill me a pork chop or a Thai-seasoned grilled chicken.
Posted by The Secret Fork at 11:57 AM No comments:

If you like beer and know anything about the local beer scene, you should know about Fernson. They brew some great stuff. After getting operations underway, the Fernson guys opened a tap room. I hear it's really nice. Unfortunately, it's located waaaaaaay up north near Spader's Camper Sales just north of I-90. This is great if you live near say, Renner, or if you're a Sanford employee assigned to their north citadel. Not so great for me, because it's just far enough out of the way to make it into my general presence of mind when it's time for a weekend beer. Besides, 15 minutes of interstate driving isn't what I'm in for when I want to drink a couple of beers, especially IPA's and other varieties that tend to sneak up on a person fast and hard.

Well, problem solved. The fine fellas at Fernson have set up a branch office in the old Flatiron building at 8th and Weber. This is the former location of Latitude 44.

Blogging on this sort of thing conflicts me, because I want to hog up a nice place like this all to myself. It's neat, tidy, bright, open, and still features live music. Fresh, tasty Fernson beer on tap- several varieties are available. And, there are a couple added bonuses. First up, thanks to the familial connection with eye surgeon and Napa winery owner Dr. Vance Thompson, Fernson on 8th has what is probably a more complete catalog of Jessup Cellars bottles available at any given moment, outside of Vance's cellar, anyway. And, if you like to eat when you drink, Breadico is located right next door- where Queen City Bakery started out. Breadico has expanded its offerings to include sandwiches and pizza. And, I'm hear to tell you that I wholeheartedly agree with Cory Myers on this point: Breadico offers the BEST pizza in town, hands down.

Good beer (or good wine) and good pie in pleasant surroundings? What's not to love? Actually, the parking isn't much to love, but hey, sacrifices must be made. 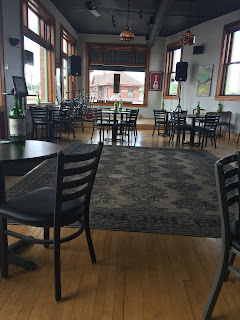 Posted by The Secret Fork at 2:44 PM No comments: