Example of Odd Things in The Friendly Aisles

One thing that I find a bit more than a tad irritating is the odd pricing of those block cheeses at Hy Vee.
The other day I was obsessed with making Eggplant Parmesan. I had some beautiful eggplants from The Good Earth, but needed a couple items to complete the dish, including fresh mozerella. So, off to the friendly neighborhood Hy Vee.
I look in the usual spot where I find the balls and logs of soft, "fresh" mozerella. Out. All gone. Nada. Finis. I even checked up front to see if they moved it up front as some feature. Not there either. I really wanted the fresh cheese, but I wanted the eggplant dish more, so I set off clear across the store to the location of the everyday block-style cheeses. Why all the different cheeses can't live together in peace is beyond me, but that's a whole other rant.
Upon reaching the block cheese area, I was confronted with the usual wacky pricing problem. Here's what I mean: The block cheese is sold in three different sizes- 8 oz, 16 oz (that's a pound in case you forgot), and 24 oz. the question is what's the best deal? You'd think it would be the big 24 oz, sort of a bulk discount thing. Nope.
Check it out yourself. Here is the price for 8 oz blocks. Neato! A sale! 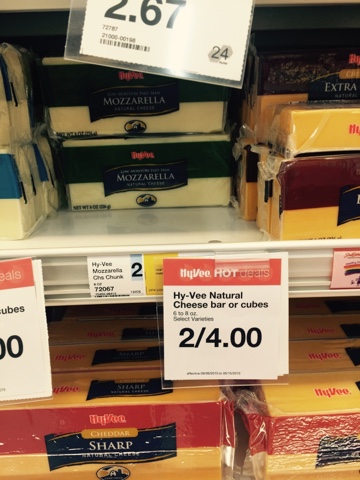 Here is the one pounder. 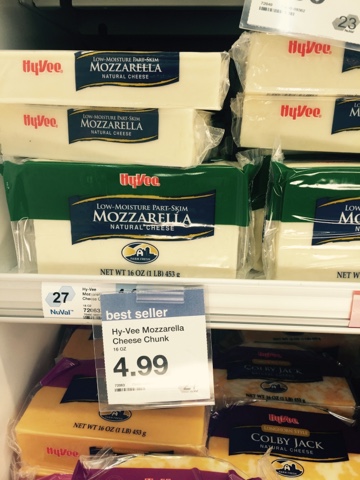 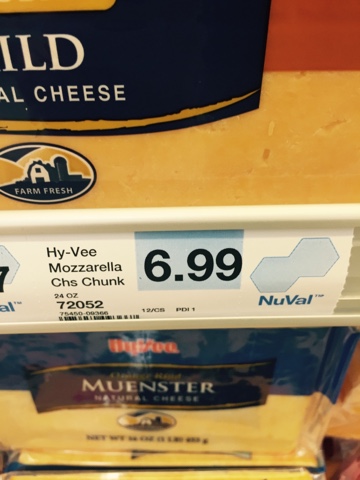 What to do, what to do .... Well, the little 8 oz blocks were the best price, so I grabbed two and got the hell out of there. And made eggplant. It was good.
Enjoy the local produce and brush up on those math skills!
Posted by The Secret Fork at 9:15 AM No comments:

Is Your Favorite Bar Divey Enough?

With all the recent kerfluffle over the comment of a downtown saloon owner considering turning the former Sid's Liquor store into a new bar featuring live music, similar to the legendary Pomp Room, or potentially named The Pomp Room, I got to thinking about what the local scene is looking like these days.

It occurs to me that a lot of the legendary sketch factor has been lost to the ages. My idea of dive bar probably wouldn't make the cut for the third D in Guy Fieri's idea of DDD. A good dive bar is dark, located in an area you're not quite sure you should park your car, smelly (once with the combination of stale beer and stale smoke), some broken furniture (like the booth with the spring that pokes your butt or a chair missing a back), and when it comes to food either a glorious cheeseburger or perhaps only a rack of potato chips and beer nuts and a jar of pickled turkey gizzards. These are places where you can generally find a group of regulars that not only day drink, they morning drink. Ideally, the place has been a somewhat recent crime scene- people forget there was a stabbing at the Pomp Room in the 1990s.

About the time the Pomp Room closed down, the Sioux Falls dive bar scene started disappearing in earnest. Let's take a little inventory to clear up what sorts of places I mean: Smoe's, certain iterations of Skelly's, Phil's Corner, The Arrow Bar, The Rainbow, The Lime Light, the original Crow Bar, The Stockman's, The Sportsman's, and the mac daddy king of all dive joints- The Frontier. Now, there's a memory, or rather a foggy string of vague semi-connected recollections. If the front of the house wasn't scary enough, with semi-catatonic patrons and people eyeing you wondering why you are in there, you could push through the back doors of swinging plywood where there was a stage set up for the, ummm, errr, "performers" and a bunch of bicycles lined up against the back wall that Charlie Johnston had collected for the law enforcement bike give away.

It seems like a lot of these sorts of places are gone, but a few are most definitely disbursed around town. I think people like to wax romantic about the old dives as they stand in line to get into the latest greatest strip mall sportsy, chicken wing-serving bar and grille. I don't often find lines to get into the Coalinga or Walter's Hi Ho. But if you want to go, they are out there, here's a short list: Little Coalinga (a cheeseburger nirvana), Walter's Hi Ho just up the street, Silver Moon over by the Farmer's Market, Log Cabin, just to name a few. These are great places to go check out, and I strongly encourage people to do so. I suspect we may lose a few more as 8th Street starts to change as the rail switching yards are relocated.

Posted by The Secret Fork at 8:59 AM No comments:

Credit Where Credit Is Due: Charcuterie at Hy Vee

I had to stop by Hy Vee today because I needed a relatively obscure ingredient (for Sioux Falls, anyway) and I sort of had a hunch this particular Hy Vee might have it. The ingredient? I needed some veal for a little cooking project. They had it.
On my way back to the meat department as I was winding through the maze of renovations, I walked by the new Charcuterie counter. And I must say . . . pretty forking impressed! When I heard Hy Vee was doing this, I figured the product would look a lot more like the deli counter and a lot less than the selection at Look's. I took a quick inventory and noticed a fine offering of cured meats, including speck, prosciutto, pancetta, double smoked bacon, mortadella, soprasetta (regular and spicy), and others. Overall, a very respectable offering. I have needs for these sorts of things in my life and I am very glad to have them here. At the Charcuterie, Hy Vee also sells a nice assortment of pickles and other accompaniments. Don't know what you want? They will slice you up a tray. And I bet the helpful smiles slice faster than the artisans at Prairie Berry.
In the future, I am looking forward to the other new features at Hy Vee, especially in the Grille or whatever they are calling it, where beer and wine will be offered. There are a lot of things about Hy Vee that drive me to drink, like their total rip off meat pricing. So, at least when I get pissed off, I can just wheel my cart over there and take a brief pause. Way to gauge consumer demand Hy Vee!
And thanks for the nice selection of tasty salted meats!
Posted by The Secret Fork at 2:04 PM No comments:

Deadwood has some great dining options. Truly, there is something to fit most Midwestern tastes and budgets. You want prime rib and crab buffet? Ok. I don't. But good ones are available. Want fancy schmancy like a sorbet palate cleanser before your main course? Jake's can take care of that. Want a really nice steak at a really decent price? Legend's.
This is a new venue. It is located in the lower level of the Franklin Hotel. Yes, in other words where Durty Nelly's Salloon used to be. For those without recent Deadwood history, the Franklin is Deadwood's version of a grand dame of an old hotel. Built in 1903, the Franklin is a commanding presence on Main Street. This is one of several buildings that will remind you that Deadwood was the epicenter of commerce and culture in western South Dakota back when Rapid City was just a hay camp. Be forewarned though, this ain't the Brown Palace and Durty Nelly's could make the Crow Bar look rather ritzy in comparison.
Well, it's all gone. All the busted furniture. The bar. The stage. The poker area. The scary bathrooms. Gone. All gone.
Now it is a relatively bright, well furnished dining area with a separate bar. Bare rock walls. Hardwoods. White tablecloths. Nice lighting fixtures, even though they are using them all to make the room quite bright.
The staff is gracious and helpful. The menu is very steak-centric. There are five steak choices on the menu plus a chicken and lamb selection. Steaks are sirloin, ribeye, filet ( two cuts) and a prime rib. There are also pasta and dinner salad choices. All steaks are CAB cut and aged in-house. And get this! Legend's is bucking the trend of offering a la carte sides, so with your order you have a choice of potatoes or a rice and a choice of soups and salads! Kind of refreshing.
Great wine selections by the glass or by the bottle.
We had steaks at our table. And here's the low down. Not bad. The ribeye was good and tasty although not cooked to a barely medium rare as I prefer. But it was good and well seasoned. The salad was fresh and tasty- a steakhouse salad of greens, olives, blue cheese in a basil vinaigrette. Other choices included Caesar and a wedge. My au gratin potatoes were good. One of my guests had mashed potatoes. They included gravy, which I found odd. Nice wine glasses and great service. Did it blow my mind? No. Was it like a trip to a meat museum like Peter Lugar or another legendary protein palace? No. Was it outstanding? No. But for a party of four the entire tab was under $150 before tip and that included an $80 bottle of cab because I am dangerous with a wine list. At that price, I can't bitch and really, there was nothing to bitch about. Had that meal cost $400, there would be hell to pay. It was a reasonably good, well-prepared and well-presented meal at a very, very reasonable price. I'd go again.
A couple things to pass on. One, if you are up to the challenge, go for the prime rib. A ribeye is $19.99. The prime rib is $29.99. I had to be reasonably functional for a business thing the next day, so I blew the 10 bucks on better wine instead of a more serious case of the meat sweats. Next time, it's prime rib. Remember the Flintstones intro where Fred gets that huge hunk of meat? Well, that's basically what you're going to get at Legend's. I'm getting sweaty thinking about it and teary because I didn't get it. Next time. Two, get there early enough to go have a drink on the veranda. It has also been refurbished and the view is awesome. 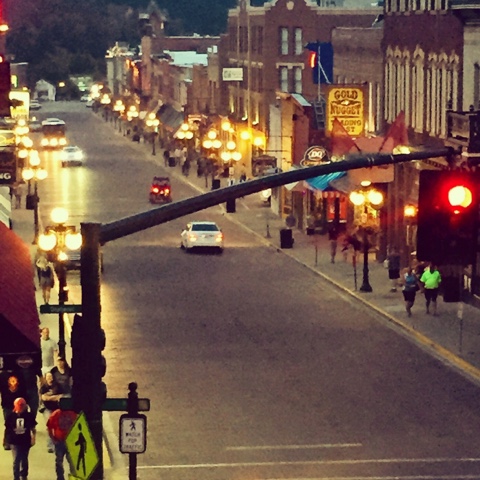 Trust me. Legend's is one of the best bets you can make in Deadwood. Just make sure to call for a reservation.
Posted by The Secret Fork at 8:39 PM No comments: